Sugar is bad so how about artificial sweeteners?  When it comes to dementia you should dump that diet soda down the drain.

April 2017 – Stroke (a journal published by the American Heart Association) ran a prospective cohort study using data from the Framingham Heart Study.  The researchers studied nearly 3,000 participants over the age of 45 and found that those who consumed artificially sweetened beverages were at significantly increased risk of both stroke and dementia.

The study concludes that the risk of stroke and dementia increases in each of the 10 years (left to right in the graph) for each group (Green, Red, and Blue).

The graph clearly shows that the more diet sodas you consume and the longer you continue to drink them, the greater your risk of stroke and/or dementia. 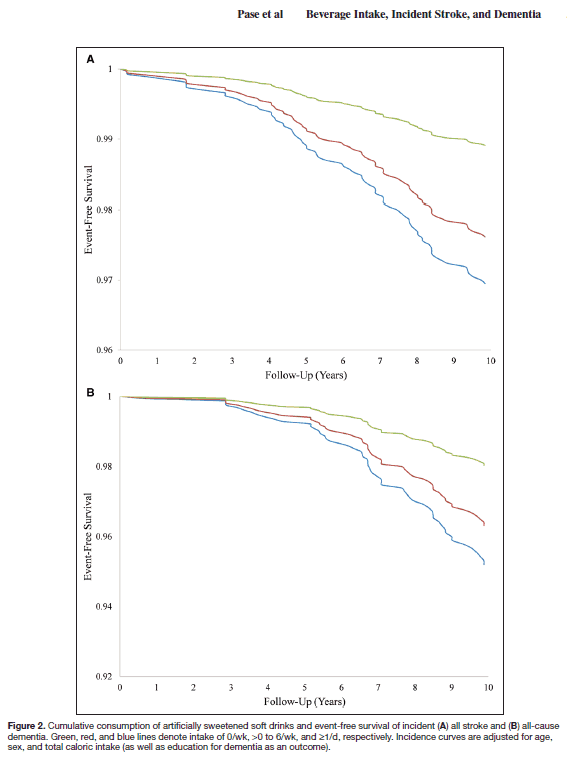 image source Stroke a journal of the American Heart Association

Here’s a pretty good article discussing the above study and another as yet unpublished study.   I love the nervous rebuttal to the double-blind placebo test:

“This study, whilst well done, is not the same as taking one or two diet drinks (containing sweeteners) per day, more often than not with food, but rather is equivalent to almost five cans of diet drinks every day for two weeks – given in the form of tablets,” says Sattar. “Also, we don’t know what these gut marker changes really mean for health so it’s all highly speculative, and there are no clear data in humans that sweeteners alter blood sugar levels in the way that is speculated by the authors.”

Sattar sounds like one of those tobacco company stooges from the 1960’s.  He admits that it’s a well done study, but his lead attack to cast doubt on the results is to imply that five cans of diet soda a day is abnormally high and that the artificial sweeteners in the study were not necessarily taken with meals.  As a former diet soda drinker I can attest that five per day is easy to achieve and most were not consumed with a meal.  I would gladly trade the two-week period of the study with the decade that I spent guzzling that swill on a daily basis.